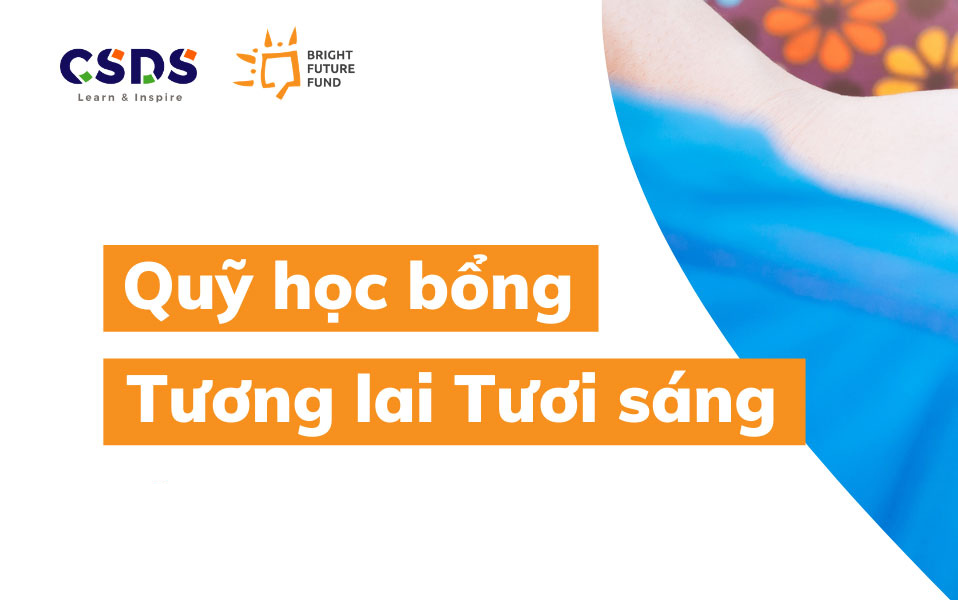 Within the framework of the youth capacity building program with the goal of “No one is left behind”, from the 2016-2017 school year, Center for Sustainable Development Studies (CSDS) has designed and launched Bright Future Fund (BFF) to facilitate for disadvantaged students to get equal access to study opportunities at the University/College level. After 4 years of implementation, from 2016 to 2019, the program has received the support of many funds/organizations and has awarded over 80 scholarships to students from 14 provinces.

In the academic year 2021-2022, the program received more than 70 applications from students across the country. Through the application and interview round, staff has found 10 suitable candidates to carry out the field trip. Due to the complicated pandemic situation, the field trip had to be postponed several times, and on October 8, 2021, staff officially visited 8 students in two areas: Chuong My and Quoc Oai, Hanoi city.

WHEN DREAMS ARE JUST DREAMS…

The first candidate is A – a student at Quoc Oai High School. In the recent national high school exam, he scored over 24 points and aspired to enroll in University of Transport and Communications). However the joy was short-lived, the money concern weighed heavily on the 17-year-old boy’s shoulders when his family’s most valuable possession was a motorbike bought by A’s savings from his part-time job since he was in the 8th-grade year.

After many efforts to ask people in the village for direction, the program staff finally reached the house where A and his mother lived in. The first impression of the house was simplicity, frankly, the place seemed a temporary shelter but not a real house where included an old refrigerator given by his uncle who collected garbage, a motorbike lying on the porch, a few pots and pans and a few other sundries. Welcoming the staff was Ms. D – A’s mother, a middle-aged woman who was cheerful and especially “capable of connecting with underworld people”. Ms. D was sick all year, so she couldn’t work hard, her family had a few poles of field, yet due to external factors, she could only work at dusk, so she earned little. A was the breadwinner of the family and has been earning money since 8th grade. The whole family ate no more than 6 meals of meat and only ate meat on important occasions such as anniversaries, Tet. Due to difficult circumstances, the school waived all tuition fees for A, however, there were many other worries surrounding the young man, more than ever, A’s learning path ahead is only a narrow alley coupled with many obstacles. His dreams at the age of 18, 20 are a full meal, warm clothes, and a stable house. At the end of the meeting, A’s sentence: “I don’t see myself having any future” resounded in the minds of the officials with painful feelings.

At the end of the meeting, A’s sentence: “I don’t see myself having any future” resounded in the minds of the officials with painful feelings.

B is also in a particularly difficult situation. Dad passed away. Mom remarried and didn’t care even though she still lived in the same district. She lived with her grandmother in aspacious house without any valuable assets. Moreover, the family had an addicted uncle in the house. Mental pressure and material burden weighed on the weak old woman’s shoulders. The staff could not forget their sharing about the difficult situation, that for many nights in a row, both of them could only hug each other and cry when thinking that one day grandmother would face heart disease again. In times of weakness like that, B always tried to encourage her great-grandmother to raise her until she went to university, then she would support herself and earn money. Besides, is it safe to live with an addict as long as any extreme moves could cause unpredictable consequences? How is B’s future like?

Another case during the visit that made a special impression on the officials was the situation of C – a senior at Quoc Oai High School. C and grandma’s shelter from the sun and rain was hidden behind a garden with a path that could hardly be called a road. The simple house held many dreams of a young girl and put on her shoulders uncountable burdens. Sharing the same dream of studying as her peers, C’s future is placed on an uncertain balance between livelihood and education. Is C’s future bright?

The family visit of 8 students ended with the echoes in the hearts of each and every staff. The saying “a hungry belly has no ears” is true in this situation. When they enter society, will the difficult situation push them into mistakes? And will the desire for a bright future be enough to light up hope in their difficult days? 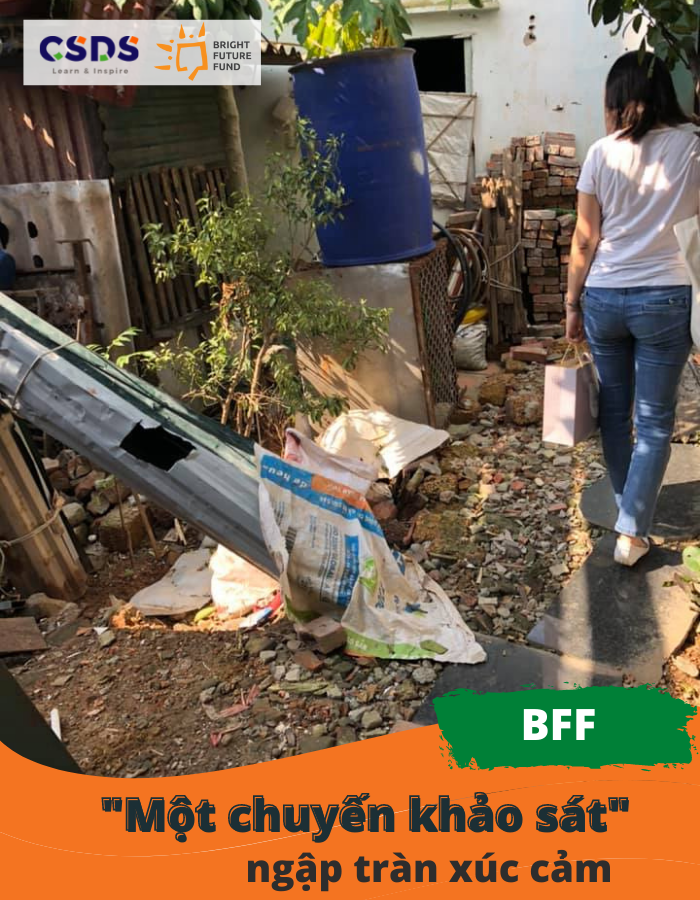 A HOPEFUL JOURNEY KICKS OFF

With these concerns in mind, in the first week of November, CSDS launched the V-TALK English learning program with foreigners in Bright Future Fund program 2021. For the first time learning English with foreigners, students inevitably felt surprised and embarrassed. However, with the encouragement of CSDS staff and the learning eagerness, students overcame their initial apprehension to quickly integrate into the lecture. After the first lesson and the trial lesson, students actively expressed their interest and hoped that the new week would come quickly to join the class. Seeing their bright smiles and joy, the staff feel happier in their journey to help students have a brighter future. In addition to academic support, CSDS has implemented financial support through granting the first scholarship to 13 students, worth 34,000,000 VND. The second scholarship is expected to be awarded in January 2022. 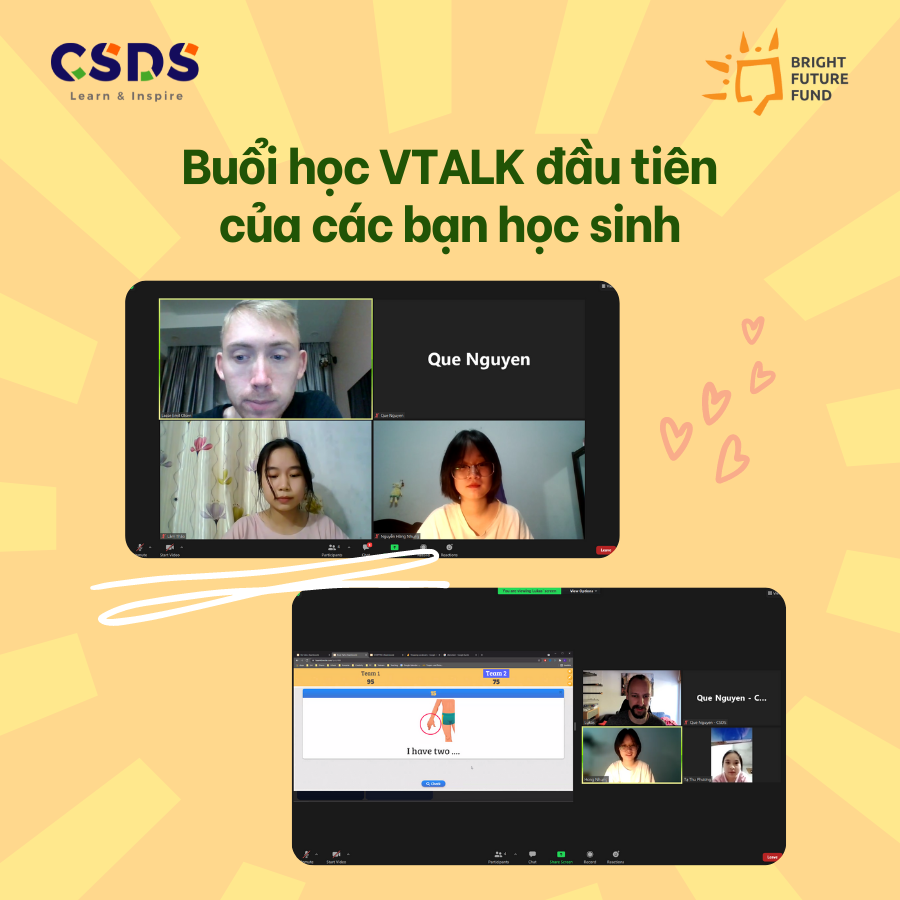 As planned, the other family visits will take place when the pandemic becomes less complicated. Along with that, the first activities of Bright Future Fund 2021 such as V-TALK began to be implemented, marking a foundation to help students have the opportunity to interact with the real bilingual environment. Hopefully, with CSDS’s support, the journey to the bright future of students will be closer and closer.